Add 48 Minutes to your Commute--in the Parking Garage 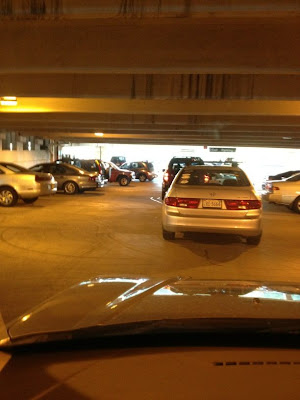 Via @dcmetrosucks: @wmata @fairfaxpolice almost 30 min and we are still not moving at south Vienna park garage pic.twitter.com/c6XP3fFq

Apparently, Metro has been taking riders hostage in the Vienna parking lot for the past couple days.

I got in my car and patiently waited in my spot. Fifteen minutes passed, then 20 then 35.

At this point I had not even been able to move out of my spot, and the line of cars in front of me had moved a grand total of one car-length.

I called customer service. The first number I called rang for about three minutes straight I let it ring – nothing.

Back to the drawing board. I looked up and found the number to the administrative office. Someone picked up, and I politely asked for someone I could talk to that had any leverage at the Vienna station. I was given a number and called parking. The woman who picked up there was uncooperative from the get-go. I always like to remain as calm and pleasant in these situations as humanly possible, because people are more apt work with you.

I began by telling her what was going on and recommended someone take a look at it. Obviously, she hadn’t listened to a word I had said because she replied “Well, have you tried holding your card to the target again?”

It took me a couple of moments to process this response to which I replied “Oh no, ma’am, I think you misunderstood me. I haven’t even been able to get out of my parking spot, much less down to the turnstile.”

Again, apparently not trying to process what I said, she asked “well, what’s the problem?”

I was starting to get annoyed, but didn't want to show it.

I replied “I honestly have no idea, as I said, I can’t even get down there to check it out.”

She responded with “Well no one has called in with a problem, and if I don’t know what it is, I don’t even know that it’s a Metro problem.”

I told her “I’m surprised that this is the first you are hearing, but I’m sitting in the middle of it, and I can assure you there is definitely a problem!”

This is where I started getting really frustrated. She said “Well there is nothing I can do if I don’t know what the problem is.”

I asked her “Can’t you call and send someone from Metro over there to check it out? There is definitely a problem, and there are a lot of angry people in here." (I'm thinking she must hear the horns blasting in the background at this point.)

She rudely argued back and forth a couple times saying that there was nothing she could do, while the tone of her voice sounded much more like “there is nothing I feel like doing to help you.”

Finally, very obviously irritated, she said “Ugh, I’ll call the attendant” and hung up the phone.

By time I got out of there, I saw two attendants working on the SmarTrip targets. My entire wait was 48 minutes.

Metro – this was the last straw. I’m not paying for this kind of service/customer service any longer. You just put one more car on the already crowded roads during rush hour.

Second day in a row there was only one working exit booth for the entire garage. One exit is shut for construction so we were down to two exit booths, but now it is one.

Useless lady refused to call her supervisor and told me to.

Another guy was a little more convincing, and the arm is now raised. Traffic is backed up to the roof.

@wmata it took me 45 min to exit the south Vienna park garage. That was longer than my train commute. And somehow this is acceptable...

Other items:
Metro refuses to share "mystery rider" program details which YOU paid for (Examiner)
at 5:01:00 AM No comments: