"A Rail Car Limo Service for One" 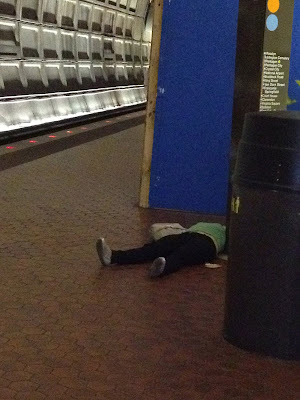 This Metro story was so hard for me to believe that I'm not sure I really do, even though four sources tell me it's true.

Apparently, if you pass out on the last train of the night and make it to the end of the line unconscious, Metro will run a special, unscheduled train--even two--to bring you to your intended destination.

Here's how it works.

When the trains reach the end of the line, operators are supposed to walk through the train. Sometimes, they find a passed out passenger.

When that happens, one source said "it is common for drunks at the terminus stations to be taken back downtown on special trains."

Three other sources confirmed this, one adding that sometimes, the operators don't make the walk through. In these cases, the passed out person may find themselves in the rail yard.

"I think it's the most ridiculous thing," said one source. "They call central, they call a supervisor, they call transit police, they find out where the drunk is going, and they take them there. It's a rail car limo service for one. How many dollars does that cost?"

The source said it happens "every other week" and started when Metro began staying open until three on weekend nights.

"They had one [drunk] in Vienna the other day," one source said. "He had to switch to the Green Line, so they ran him back downtown on a special train and then ran a special Green Line train to take him home."

But you don't even have to be wasted to get a special train.

One employee told me about a time recently when a customer showed up to catch the last train into town one weekend night only to find the train had already left.

The employee wasn't sure if the train left early or the customer was late, but the customer began to get very angry and threatened to sue, saying the schedule was a legal contract. He even called central control to complain. (The employee was unsure how they knew the number.) After escalating the argument, Metro caved and ran a special train to take him from Dunn Loring to Ballston.

Another source said he was less concerned with the money Metro spends on these special trains but rather that running extra, unscheduled trains can potentially narrow already very tight windows during which vital repairs to the system can be done.

"Metro staying open that late makes it very hard to do some of the heavy lifting repairs that are needed all over the system," they said. "These drunks need to take their own responsibility and either not drink so much or suck up a cab fare."

None of the sources knew why Metro does any of this, but one said they thought Metro was probably sued once, and in the aftermath, it became standard operating procedure.

They told me the reason Metro won't move a train when there's a sick customer is that several years ago, a passenger was apparently having a heart attack at Farragut West. Instead of rendering assistance, the train went ahead to Foggy Bottom, near GW hospital. The notion was the patient could get to the hospital more quickly by doing that.

The person turned out to be fine, but sued Metro for not rendering immediate assistance.

When there's a sick customer "they will not move the train now for fear of being sued," the source said. "One person sued, and now the entire system pays for it."

Other items:
It takes a study for journalism to notice handicapped impediments in Metro (Examiner)
at 5:30:00 AM No comments: