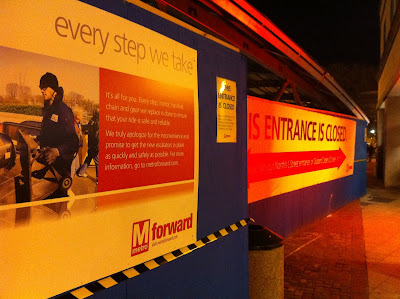 It has been about six weeks since Metro shut down the south entrance at Dupont Circle for escalator replacement.

How's the project coming along?

Not so well, says a Metro source.

According to them, "nothing is being done; they've taken the metal panels off the sides of the escalators, and that's it."

Apparently, the contractor needs to lift out the three-part escalator truss (skeleton) with a crane. But to do that, they need to remove the canopy.

Metro won't let them do that.

So now, the contractor has come up with a solution, probably a specially designed crane, to work around the canopy.

"They're stopped while they make this crane," said the source. "How much is this costing Metro? Metro has all those transit police, all those other people there standing around. I guess the contractor is like 'we'll get to it when we can.'"

You'd think something like this would have been addressed during the bidding process.

Who could take 8.5 months to replace some escalators?

Other items:
WMATA to bidders: don’t innovate with real-time signs (Raschke on Transport)
Overtime thief convicted (WMATA)
Dan Stessel locks down his Twitter account
at 5:30:00 AM No comments: