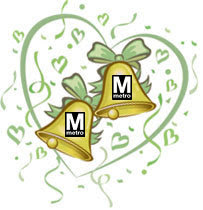 Has anyone met a significant other on Metro?

Actually, I think there are probably a lot of "missed connections" on Metro. I wonder if that has anything to do with the overall levels of stress and anger.

I used to take Metro every day to work. It was miserable even though I only went a few stops down the Red Line.

Finally, it got so bad that I gave up and started walking to work. I'd say on average, the walk takes me about the same amount of time the Metro did.

But this also takes into account a little treat I gave to myself for walking: a stop for a cup of coffee (to go).

One day, while I was waiting for my coffee, I noticed a very attractive woman. We exchanged smiles, but that was about it.

Right there, that's more than I think we would have exchanged on the depressing Metro. There, it probably would have been a glare, if anything at all. Everyone is so zoned out or downright unhappy.

Anyway, I ran into her again a few weeks later, and struck up a conversation.

I'm happy to say that one thing led to another, and now we're engaged.

I know there are a lot of variables at play here, but my choosing to not take Metro is definitely one of them.

So, Metro. Thanks for sucking so bad. Leaving you in the rear view mirror saved me a lot of money and changed my life for the better.

Other items:
Cracked rails on the rise (Examiner)
Metro to detail Green Line derailment today (WaPo)
at 5:30:00 AM No comments: